Life is a balance between holding on and letting go. 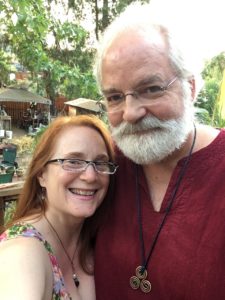 “Life is a balance between holding on and letting go” – Rumi

Us on our 29th wedding anniversary.

Next week my husband Joseph and I will be celebrating our 32nd anniversary of living together. We met as massage students when I moved into the house he was living in, so we’ve been living together since the day we met, and subsequently working together once we became licensed massage therapists over 30 years ago.

Our life together has morphed from students living in a collective house in Boulder, Colorado, to living in a tipi, a yurt, a one-room log cabin, and finally our cozy three bedroom, one bath, home in Ashland, Oregon, where we raised our two daughters. The biggest leap we made in that trajectory (until now) was from a beautiful passive solar home on two acres on the front range of Colorado (where we were married in an open field below a mesa) to a tipi by a river on 38 acres in Southern Oregon.

We have lived in our current home for 27 years, and it’s been blissfully ideal. We have nearly one-third of an acre very centrally located in town where, with friends, we have collectively created a huge garden and a food forest. We have a studio in what used to be a three-car garage where we have our professional office and have been working side by side for over 20 years. Our home is light-filled (by sunlight, good humor, and art) and is a place where new visitors often exclaim over how nice it feels inside.

Both of us love our work as healing arts practitioners and teachers, and working for ourselves in our home-based practice has been idyllic. The only thing missing from this constellation of privilege and perfection is a retirement package, and so at the ages of 63 (him) and 56 (me) we are facing the next big leap in our lives together – re-purposing our home and property to sustain us as we inexorably move toward old-age and retirement.

This has brought up a lot of feelings – not just ours, but our daughter’s and our friend’s. It’s a big change, and with that naturally comes fear and resistance and not wanting to let go of the comfortable known (especially when it’s so very comfortable). But many years ago, when my aged grandmother left her house for the last time on a stretcher (because of a fall) I made a vow that I would recognize and honor the time in my life that change was inevitable, and step into that change by my own volition.

My friend and colleague Debra Burchard speaks often of choice, and how as practitioners we need to honor our client’s autonomy and right to choose the direction that their healing takes. I told Joseph in a deep conversation about this leap we are taking, that I want to take action from a space of having choice, and making those choices together, rather than waiting for the universe to choose for us. To paraphrase Micheal Beckwith: allowing ourselves to be pulled by our destiny, rather than pushed by our fate.

Though we began to envision this shift many months ago, and have taken steps toward its fruition, we’ve come to a crucial turning point since the Winter Solstice has passed and the cycle of earth energy is gradually moving toward the end of Winter/Water (where contemplation and gestation take place) and into the quickening of Spring/Wood energy (where shit gets done).

To renew our purpose and to gather strength to carry it through, we sat together this past weekend to cultivate our vision of the future. Here’s the Big Picture: We’d like to create a type of co-housing community here on this big lot in the middle of town. We have the potential of 4 dwellings which will still leave the food forest intact and plenty of room for (collective) gardening. First Step is that we move out of the main house and rent it to copacetic folks, while we temporarily balance between my mother’s house and the office. Second Step is to remodel the studio into a two-bedroom apartment where we’ll live and work while we implement Step Three, which is to build one or two tiny homes on the lot (as per Ashland city planning regulations). End result: a collective community within a community, living in sync with this patch of earth, loving and appreciating the cycles of the sun and seasons and generations together. Who knows which dwelling we’ll end up in as the elders of this community, could be a tiny house of our own design, could be the studio, or it could be the “big house” once again.

During our visioning session this weekend we reminded ourselves that when we moved from Colorado to Oregon to live on raw land in a tipi, we were being pulled by a vision of our future that we had initiated, but did not look in the end like the future which our destiny was actually pulling us toward. We thought we were destined to create an off-the-grid homestead in the countryside by a river, but instead we ended up in the city limits on public utilities. However, those first steps of action toward our vision were crucial to our ultimate realization of the harmonic lifestyle we have been living here in Ashland. They were stepping stones to our fulfillment as practitioners, partners, parents, and part of an intimate family of friends, which has come to pass beyond our wildest imagination.

Once we let go of the attachment to the initial vision being “right” and let ourselves continue to be pulled by what we love, we landed in exactly the right spot. So as we lift our feet to take this next step, having planted the seed of our vision during this seasonal period of gestation, we want to remember that we are partnered on this journey with our Source, and that the outcome may look different than what we are envisioning now, but we will trust in the unknown mystery as we move forward because we have evidence that It has our best interests in mind.

Our luscious lot in the heart of Ashland. 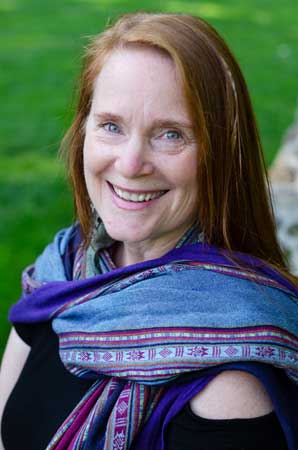